GODS OF THE DARK WEB by Lucas Mangum 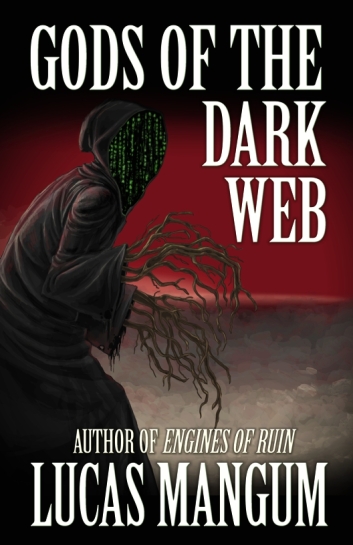 From the author of Engines of Ruin, comes a dark suspenseful novel for fans of Black Mirror, Edward Lee and cosmic horror.

The internet is a scary place. Beneath Facebook and Twitter is another world. One in which anything can be obtained—for a price. A community of black markets, depraved pornography, and death. This is the dark web.

Leon was just curious, he heard the stories of the secrets and forbidden fetishes that the dark web offered. He was an activist, protesting against war and hate. But after a protest became violent, he felt he needed protection. Being a teenager with no way to buy a gun legally, he had no choice but to turn to the dark web.

This rash decision sends Leon spiraling down into a dark side of humanity that most don’t know, or even want to know, exists. A world of murder, torture, and cannibalism. But behind all that there is something worse, something stalking him and intent on ruining every aspect of his life. Now Leon is fighting for his life and reputation as he is being hunted by vile and arcane forces. They are…

Gods of the Dark Web

This entry was posted on February 8, 2018 by Jeff Burk. It was filed under Uncategorized .

Deadite Press brings you the very best in cult horror fiction. We are dedicated to publishing the goriest, craziest, and strangest stories in existence.

Deadite Press is an imprint of Eraserhead Press.

THE COMPLEX by Brian Keene